Venns Attorneys, today one of the largest law firms within the KwaZulu-Natal Midlands region, had humble beginnings.

In the heart of the city of Pietermaritzburg in small offices in Timber Street, Denis Lowe opened a law firm on 1 March 1952. Three years later he was joined by Garnet Venn. In 1957, Andor Nemeth, a Hungarian refugee, was taken in by Denis as a clerk. Shortly thereafter, in 1960, Garnet Venn became a partner.

The firm’s name then changed to Denis Lowe, Venn & Co.

It was not until 1970 that the firm’s name was changed to Venn Nemeth & Hart.

As the firm grew, it moved to premises at the Southern Life Building, and later in 1984 occupied the 7th and 8th floors of the United Building Society building on the corner of Longmarket and Buchanan Streets.

Two years later, in a move that would solidify the firm’s identity, Venn Nemeth & Hart occupied 281 Pietermaritz Street which was to be our home for the next 34 years – close to businesses, government departments and the courts.

Following this move the firm flourished. Being in the centre of the City engendered an ethos of involvement amongst the partners at the firm, something that has become entrenched over the years. We have always had a number of partners involved in outside boards, from Community Chest and faith-based organisations, to the Legal Professions Council to the Pietermaritzburg and Midlands Chamber of Business.

Each has brought new strength to the fabric of the firm.

A vital interest in Information Technology has meant that we are a firm that is enthusiastic about engaging with tech, streamlining of office processes, opened up new areas of practise which has led to our firm acting as a BETA testing site for software developers.

A cornerstone of our firm is focus on empowerment. Thus we were the proud home of late Judge Tholakele Madala, and Judge Matthew Francis - as they grew in the legal profession before joining the bench. The late Judge Madala joined our firm as a candidate attorney in 1970, and rose through the ranks finally to serve at the Constitutional Court.

A passion for property development has allowed us to be part of a number of prestigious developments in our City and surrounding midlands and coastal areas.

What’s in a name

In 2013, our firm grew as a result of us incorporating a well-respected and established firm, Geyser Liebetrau DuToit & Louw. Add Venn Nemeth and Hart into the mix. It was out of these very long names that we embraced the name used by us and our clients, “VENNS”, to carry forward as our firm’s name.

Venns now has a team where some members of staff have worked here for over 40 years. We pride ourselves on creating a space where staff want to stay and are afforded the opportunity to grow. The majority of our directors joined the firm as articled clerks, a testament to our commitment to identify and promote young talent and creating an environment where they are able to do so.

Venns prides itself on offering our clients big-city service with small-firm experience. Our business-centric approach means we offer our clients the same businesslike advice and service which we use to run our firm. This has allowed us to be proudly associated with clients like Standard Bank, Investec, Transnet, Save Group, the University of KwaZulu-Natal and the Willowton Oil Group. 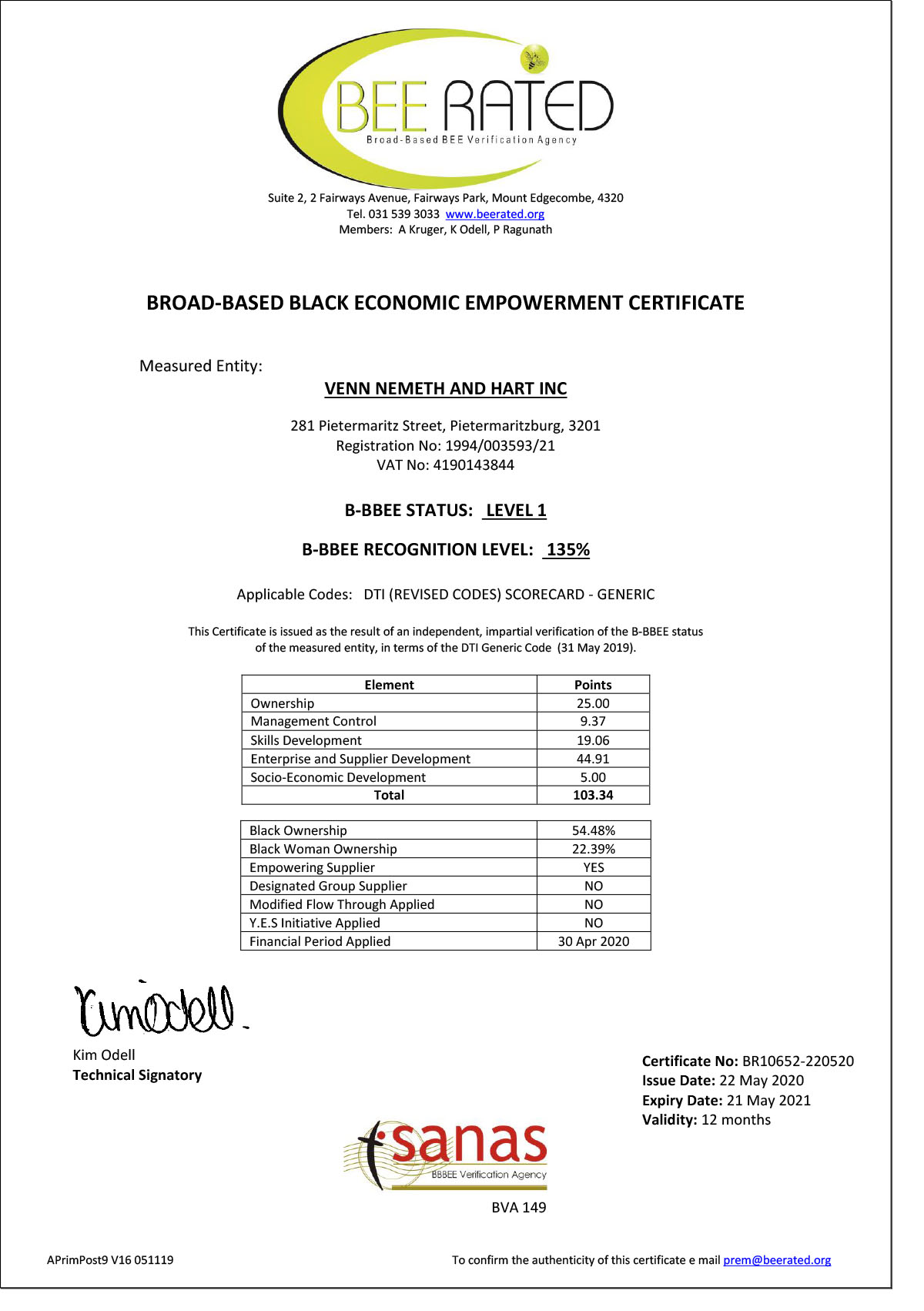 We use cookies on our website to give you the most relevant experience by remembering your preferences and repeat visits. By clicking “Accept All”, you consent to the use of ALL the cookies. However, you may visit "Cookie Settings" to provide a controlled consent.